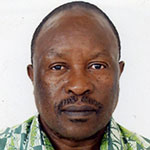 Kimani Njogu is a linguist, literary critic and cultural scholar. He is the Director Twaweza Communications and Executive Director Africa Health and Development International (AHADI).  Until 2003, he was Associate Professor of Kiswahili and African Languages at Kenyatta university.Between 1998 – 2007 he was was Council Member of the International African Institute, University of London. In 2004, Kimani was appointed a Member of the three-person Task Force for the East African Kiswahili Council in the East African Community, drafting the Kiswahili protocol for the Council of Ministers.

He is recipient of the 2000 pan-African Noma Award for Publishing in Africa for a Kiswahili book. For over a decade he has served as Chairman of CHAKITA-Kenya (The National Kiswahili Committee); and Chair of the Board at the Legal Resources Foundation and CODE-IP Trust. He is also Member Kiswahili Cross Border Commission at the Academy of African Languages and Member Working Group on Safety and Security of Journalists in Kenya.